Light Therapy Glasses: How to Feel Energetic Every Day

This is the ultimate guide to light therapy glasses.

So, if you want to learn about:

You’ll love the helpful information in this article.

Let’s first start with how they work and what blue light is. 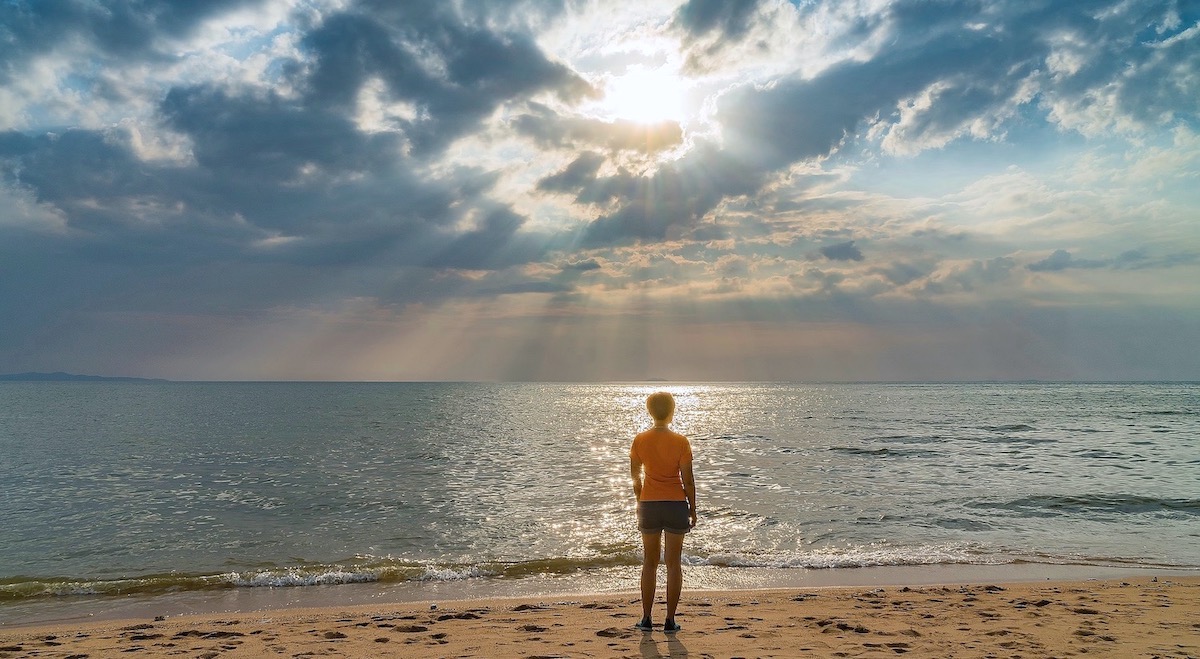 What Is Blue Light?

Light is composed of electromagnetic waves, and they come together in groups according to their lengths.

The lengths determine the color of light. The spectrum of colored rays creates sunlight – the main source of blue light.

Visible light, a part of the electromagnetic spectrum, has a wavelength between 400 and 700 nm.

Blue light waves are one of the shortest but highest-energy waves in the spectrum of visible light. In fact – the shorter the wave, the higher its energy.

The Crucial Role of Light for You and Your Body

When you’re outside during daylight, you get the most of natural blue light. That’s very important for the adaptation of your body to the light and dark cycles.

Let’s get a bit techy for a second. Studies have demonstrated that shorter waves are crucial for keeping your body in balance. That’s because they suppress nocturnal melatonin (the sleep hormone) much better than longer waves.

During a day without sunshine, the length of the light waves is longer. Thus, they can’t suppress melatonin as effectively. As a result, you feel tired and lacking energy.


“Is all that light good for you?”
Let’s answer it in more detail.

The developments in digital technologies have significantly increased your exposure to artificial sources of blue light.

If you’re exposed to artificial blue light for a long period of time or at the wrong time (for example, before going to bed), this can have a negative impact on your sleep quality.

However, the light that electronic devices emit is not the same light that light therapy use!

Field reports have discovered that the turquoise range of blue light (from 465 to 495 nm) is vital for your vision, and ultimately for your health. The light therapy glasses AYO use exactly this type of light. Here’s more information about it:

- AYO uses 470-475nm blue-turquoise light, which is outside of any harmful rays. It’s UV- and Infrared-free.
- AYO light has been certified for photobiological safety by the German regulatory body TÜV Rheinland and is considered safe for the eyes in accordance with Directive IEC 62471 of the European Union.
- AYO’s blue-turquoise light is outside of the blue-violet light (wavelengths of 400-450 nm), which is not recommended for excessive exposure.

In short, they do. Let’s explore how.

When you expose your eyes to blue light, it stimulates cells in the retina. In return, they send signals to the hypothalamus (the so called “master clock” in mammals).

On the basis of the information your master clock gets from the retina, it makes you feel awake or sleepy by controlling your hormones, body temperature, and other functions.

Studies show that blue light has a HUGE impact on your energy levels. It elevates your mood and boosts your alertness.

This energizing effect is the immediate, short-term consequence of light therapy. To achieve a long-term effect, which puts your body clock in sync, timing is crucial.

How do we stay awake? By getting exposure to blue light either in the morning or throughout the day. Blue light effectively suppresses melatonin (the sleep hormone). As a result of its suppression throughout the day, it rises sharply in the evening, informing you it’s time for bed. 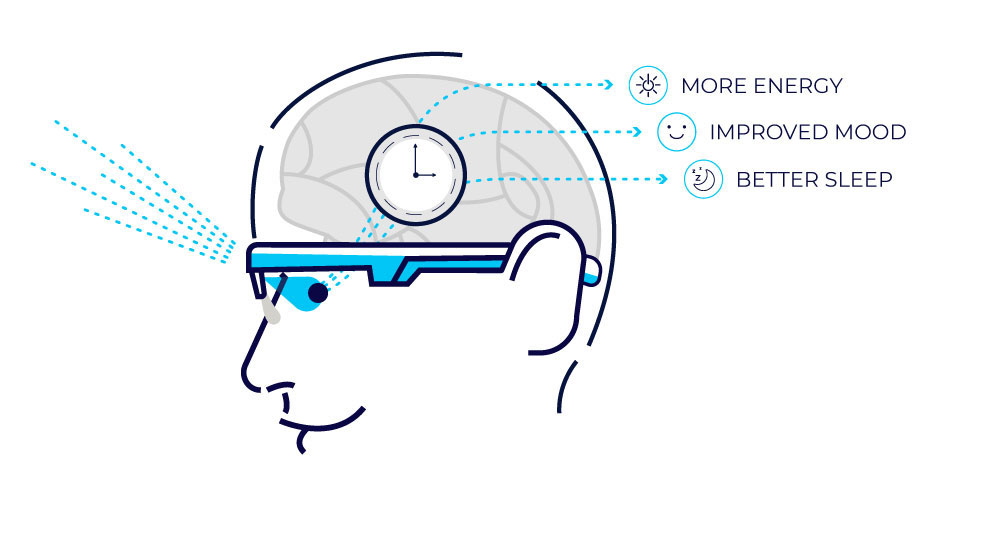 How Does AYO Help You?

The AYO glasses come with one groundbreaking feature that makes all the difference for you. AYO’s mobile app syncs to match YOUR own personality. It helps you to in three main ways:

Feel a Surge of Energy

The glasses take the most effective wavelength (470-475 nm) of the blue light spectrum, and uses it to adjust your body clock to boost your energy.

The best thing about this program? You can use it at any point of the day you want.

To guarantee maximum effects, you can wear the AYO glasses several times throughout the day. For instance, once in the morning, and once after lunch – if you suffer from afternoon energy dips.

For the best effect on your sleep, use the wearable in the morning*. AYO will effectively suppress melatonin during the day, resulting in its production in the evening. This will help you be alert and energetic during the day, and fall asleep in a natural way at night.

*This is the case with most people. However, AYO’s software considers your personal data, desired effects, and light intensity, and calculates the precise timings of each of your sessions. So, if you’re a shift worker, the app will suggest you when to use the glasses according to your schedule.

Balanced energy and sleep-wake cycles will make your productivity and the general quality of your life go through the roof.

When was the last time you felt great after a long-haul flight? Don’t remember it, right?

Whether you’re traveling for business or leisure, long-distance flights, and their effects on your sleep and energy, are always a challenge.

Besides boosting your energy and improving your sleep, AYO helps you adjust to a new time zone up to 3 times faster. You just have to enter your flight itinerary and the app will create your personalized schedule.

With it, you’ll know when to use the glasses to beat jet lag with just a few clicks. The application also provides you with information when to avoid any kind of light to help your body adjust faster to the new time zone. How cool is that?

But there’s more! AYO’s minimalistic case makes your trip even easier. It not only protects your device, but you can also charge your light therapy glasses wirelessly.

Before we move to the history of light therapy, come two inevitable questions:


“Can you wear glasses during light therapy?”
“ “Should you use the wearable with open or closed eyes?”
AYO is the most convenient light therapy device. Its minimalistic design doesn’t obstruct your view. This means you can continue doing your daily errands without hindering your sight.

Compared to old light boxes, this is light therapy on the go.

Plus, AYO weighs less than an ounce, so you won’t even feel you’re wearing it.

The Peculiar History of Light Therapy

Light therapy is nothing new. Ancient cultures worshipped the Sun because they were aware of its healing light.

The people of Egypt, Greece, China, and India have been practicing light therapy for thousands of years. They believed in curing illnesses with colors. So, much like us, they loved sunbathing.

Doctors in Ancient Egypt used sunlight and colors for healing. They trusted that “bathing” in colored light helps the healing processes, and used blue colors for curing water-related deficiencies.

Additionally, they erected special temples for healing with both sunlight and colored light.

The ancient Greeks used to construct buildings without roofs to expose themselves to more sunlight. The Father of Medicine, Hippocrates, recommended sun-therapy as a successful cure for a number of diseases.

The city of Heliopolis, whose name translates to “Sun City”, was famous for its light rooms and healing temples. The city still exists, so make sure to visit it when you’re in Greece next time.

The peoples of ancient China practiced colored light healing since the olden days. Classical Chinese medicine connects health with colors. It combines the use of elements, such as fire, earth, and water, to improve organ functions and your overall mood.

Ancient Chinese trusted that the colors you attract are either alignments or imbalances with the universe and the energy surrounding you.

Ancient Indians loved bathing in sunlight, too. Similar to other ancient civilizations, they believed that balancing elements would boost positive energy and enhance your overall wellbeing.

Ayurveda, one of the most prominent Indian practices, focuses on the balance of color. That’s why each of its seven chakras relates to a color.

The Science Behind Light Therapy

Before we wrap it up, let’s quickly look at the advances of light therapy in the 20th century.

Light therapy owes its scientific development to the work and efforts of the Danish physician Niels Finsen. He is deemed as the creator of contemporary light therapy.

Dr. Finsen’s received the Nobel Prize in Medicine in Physiology in 1903 for his work in phototherapy. It recognized his contributions to the treatment of various diseases, opening a new path for medical science.

His own health problems were the reason he began his investigations on light. Since he resided in a house facing north, he sought sunrays as much as possible. That’s how he started noticing the fantastic effects of sunbathing and artificial light baths.

The science community embraced his medical discoveries and encouraged them, paving a way for the development of light therapy.

A host of studies on light therapy followed the discoveries of Dr. Finsen. They proved that blue light wavelengths serve as a non-invasive cure for body clock disorders.

All mammals, humans included, have a body clock. It coordinates daily rhythms and basic body functions, including the sleep/wake cycle.

Your body clock responds mainly to light and darkness. It’s the exposure to light that regulates it.

The Curious Case of NASA Astronauts

Disruptions of your body clock are sometimes unavoidable. In the last 40 years, NASA has been using light therapy to help its astronauts maintain optimal health during long flights in space.

A good number of these astronauts experience serious sleep issues because they see the sun rise and set 16 times a day.

For that reason, NASA’s researchers developed a special Lighting System. It helps to manage the body clocks and improve the astronauts’ sleep and performance levels during missions in outer space.

Last but not least, light therapy and light therapy glasses can help you if you suffer from Seasonal Affective Disorderi> (SAD), broadly known as “winter blues” or “winter depression”.

We hope you’ve enjoyed our ultimate guide on light therapy.

Now, we’d like to hear from you: Have you ever considered light therapy?

Are you going to try the best light therapy glasses – AYO?

Either way, let us know by quickly shooting a message to support@goayo.com.
Share with your friends